Rough Edges: notes on Back to Life and The Other Two

After 18 years in prison, Miranda “Miri” Matteson has moved back in with her parents in Hythe, Kent. She was sent away for the accidental death of her friend Lara, and she’s done her time, but she’s been branded a murderer, and although she keeps insisting “it wasn’t like that” — and indeed, it wasn’t like that — that’s the term that stuck. That’s why she awakens to find “psycho bitch” painted on her parents’ fence. That’s why a box of feces is delivered to her home, and a brick sails through the window of her first place of employment.
Read more »
Posted by Tommy Krasker at 5:00 PM 10 comments:

Email ThisBlogThis!Share to TwitterShare to FacebookShare to Pinterest
Labels: Back to Life, Daisy Haggard, The Other Two

Is there any Doctor Who season as polarizing as Series 8? Is there another that not only divides fans, but wittingly pits them against each other? You rarely hear a moderate opinion about Series 8 — folks either love it or hate it. And for many who love it — as I myself do — it’s one of the greatest seasons, and it’s distressing that others can’t see it. And so you feel a need to defend it against its detractors. Very little about Doctor Who inspires that level of protectiveness; until the Chibnall era brought out the crazies, Doctor Who fandom — recognizing that divergent opinions were inevitable with a show that’s been running for some 40+ years — had pretty much adopted a “live and let live” attitude. I can’t stand most of Series 3, but if someone tells me it’s their favorite season, I’m fine with that. And conversely, I think Series 5 is sublime, but if someone tells me they don’t care for it, it rolls off my back. But come after Series 8 and, well, it’s war.
Read more »
Posted by Tommy Krasker at 7:56 PM 8 comments:

The 10 Best "WKRP in Cincinnati" Episodes

WKRP in Cincinnati is both an enormously engaging and an undeniably frustrating series. Even during its initial run, it was an easy show to love, but a challenging one to stay friends with. Something always seemed to get in the way of it being as consistently funny as it should’ve been. The characters were fresh; the actors were splendid. And the writing had so much potential — potential that too often was squandered. From the start, there were tensions between creator Hugh Wilson, who wanted to do a sophisticated ensemble comedy, and the network, CBS, who wanted more kid-friendly programming. There was an influx of new writers in Season 2, a few of whom were more suited to sketch comedy than the sitcom format. And Wilson himself suffered burnout in Season 3 that led to a string of strangely downbeat “special episodes,” because — in his exhausted state — he found it easier to write drama than comedy. It wasn’t really until the show's fourth and final season that the quality managed to stabilize, and because Wilson was more hands off that season — turning over headwriting chores to PJ Torokvei, who, from the evidence, was not as skilled at polishing scripts — those episodes often felt scrappier than the best ones that preceded them.

Doctor Who: in praise of "The Savages"

The last of three lost Doctor Who serials that don’t get nearly enough praise or attention. To check out the first, “The Abominable Snowmen,” click here; to check out "The Smugglers," click here.

The 10 Most Comforting TV Episodes About Death 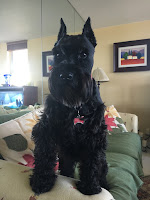 My 12-year-old miniature schnauzer Czerny died earlier this month. As friends here know, he wasn’t just my puppy — he was my support dog and my best friend. Philip and I had two dogs before Czerny, and both brought something wonderful to our lives, but Czerny was special. He had a joie de vivre and a sense of wonder that were infectious. Every meal was the best meal. Every walk was the best walk. Every trip was the best trip. We adopted Czerny in early 2009, shortly after I was diagnosed with degenerative autoimmune disease. He was with me when my health started to decline in 2011, and when it dramatically worsened in 2016 and 2017. Eventually, as my world got smaller, as my life was forced into a very predictable routine, I began to see the world through Czerny’s eyes, and it brought me new purpose and vitality. I came to realize that sameness doesn’t have to be sad or dull — that you can still greet a familiar day with an eager heart.
Read more »
Posted by Tommy Krasker at 7:04 PM 19 comments:

Unexpectedly, despite the pandemic curtailing output, 2020 was an awfully good year for television. It started strong, with a half-dozen fine dramas launched in January and February, and by the time the industry shut down, enough shows were in the can that they could be sprinkled through the spring and summer months.

Let’s presume you’re familiar with the premise of Kate & Allie (two divorced mothers — best friends since high school — decide to share an apartment in Greenwich Village) and jump right to the part where we dispel a few myths. At the advent of the internet, it felt as if the history of television was being chronicled by people who had watched the shows as they aired, and developed opinions and theories in real time. Now that we’re two decades into the 21st century, it’s come to seem as if all shows that predate Friends are being documented by second-hand sources: viewers who came to them decades after the fact, who get their information and often their assertions from the likes of Wikipedia. You see the same false presumptions and annoying inaccuracies crop up in article after article — articles that have clearly been cribbed from one another — and you’re left thinking, “That wasn’t how it happened.”
Read more »
Posted by Tommy Krasker at 6:48 PM 8 comments:

Collateral was my favorite TV drama of 2018. With only two months remaining, I’d be surprised if Roadkill doesn’t wind up my favorite drama of 2020. Both were written by David Hare, and in tone and construction, they couldn’t be less alike. Essentially the only thing they have in common is that both are masterful. So basically, what we have here is a 73-year-old playwright and screenwriter at the peak of his powers, which, offhand, might just be the most encouraging thing I can say about 2020.
Read more »
Posted by Tommy Krasker at 1:34 AM 15 comments:

Of the sitcoms I’ve profiled at this blog, some emerged out of the gate fully formed (Murphy Brown, Bewitched). Others took a while to get their bearings: to figure out how to most successfully showcase the characters and mine the comedy. And that’s not that unusual. A whole lot of promising sitcoms don’t catch fire till Season 2; the first season is a bit of a learning curve for the writers, and come Season 2— if the show is filmed before a live audience — you get to share in the audience’s exhilaration, when it’s apparent to all that the show has been (sometimes only subtly, but nonetheless momentously) transformed, and the laughs have blissfully multiplied. And then there are the shows that don’t reach maturity till a little later. Both The Mary Tyler Moore Show and Designing Women become the best versions of themselves in Season 3: the former through a soft reboot, the latter through a careful rebalancing act.

But how about a sitcom that becomes the very best version of itself in Season 7?

Doctor Who: in praise of "The Smugglers"

The second of three lost Doctor Who serials that don’t get nearly enough praise or attention. To check out the first, “The Abominable Snowmen,” click here.

There’s only one reasonable response to “The Smugglers” — and its tale of 17-century piracy — and that’s unconditional surrender.

And still it’s the single most overlooked serial in all of Classic Who.